Although they are primarily executioners, tɔprɛ also refers to a drum, the aworobɛn (trumpet/horn), the music they perform, and the dance associated with this particular drum. The custodians brought it from Adanse Akrokyerɛ when they realized Nana Ntim Gyakari and Denkyiraman were on the verge of losing the war to Ɔpemsoɔ Osei Tutu and Asanteman. Because they belong to the Asona clan, they first went to Nana Oti Awere, Akwamuhene at that time, who later took them to formally introduce them to Ɔpemsoɔ Osei Tutu. Osei Tutu then asked the Atwemahene at the time, Nana Agyeibi, to give them a place. The king later created a stool and a chief for them and gave them the kantankrakyi sword and ordered them to use it as part of the regalia that protects Sikadwa Kofi. The story is told of Nana Gyamanin Awere who came upon the atoprɛ drum in the forest on one of his hunting expeditions. The drum was placed on an asipim chair so he believed it belonged to mmoatia (dwarfs). He fired his gun three times and when no one showed up, he picked up the drum and took it home. Since they did not know the name of the drum, who owned it, or what it was used for, Gyamanin Awere consulted the family’s deity, Ɔworɔ. Ɔworɔ’s priest told them that the name of the drum is tɔprɛ, it belonged to a king and that they should return it to him. The priest went on to say that Nana Gyamanin Awere’s family would perish if they decided to keep the drum. They were further instructed never to place the drum on the ground and that it should always be placed on an asipim chair. The only time the drum is played is on Akwasidae Dwoɔda (the Monday after Akwasidae when they are in the process of executing a criminal). As the Akan saying goes, Atoprɛ to a etwa Dwoɔda (Atɔprɛ takes place on Monday). The Kokorahene is responsible for tying the individual with the kokora rope (with thorns) while they play the atoprɛ drum behind the convict and walk through all abrɔno aduosonson (the seventy-seven surburbs) in Kumase. In those days, abrɔno were equivalent to households and they were all located in present day Adum. The drum text:

You are going to die

You are going to die

For the Atoprɛfoɔ, execution was in the form of bodily mutilations and gradual bleeding of the convict until he passed out due to the loss of blood. When the convict was paraded in the streets, they would, for instance, ask him, “have you seen the skin on your back before?” Then they would cut the skin on his back and show it to him. “Have you seen your ear before?” They would cut his ear and show it to him. While they were parading the condemned person in the streets, one of the atɔpre chief’s nephews would be dancing in front of the condemned man. He is the only one who is allowed to dance and individuals who were tempted to dance faced harsh penalties of fines or death. One of the most famous of his nephews was Anin Agyei and that gave rise the to saying: Anin Agyei a odi atɔfoɔ kan (Anin Agyei who leads the condemned). This would continue until they returned to the palace where the Asantehene would confirm and congratulate them for performing atoprɛ. Because the chief’s hand would be covered with human blood, he would not shake Otumfoɔ’s hand. This tradition continues to today even though they no longer perform atoprɛ nor perform executions. The condemned person cannot be killed nor should he pass away until he is presented in his mutilated and bleeding state to Otumfoɔ. The Atoprɛhene would face serious consequences should a condemned person die before they returned to the palace. Function: They are always available to protect Abenwa (the Gold Stool) and in the absence of Abenwa, they protect Otumfoɔ’s akonwa (chair) during akwasidae ceremonies or dwabɔ. In addition to the Adaedwoɔda, Tɔprɛhene is available on Tuesdays when they perform rituals in the stool house. 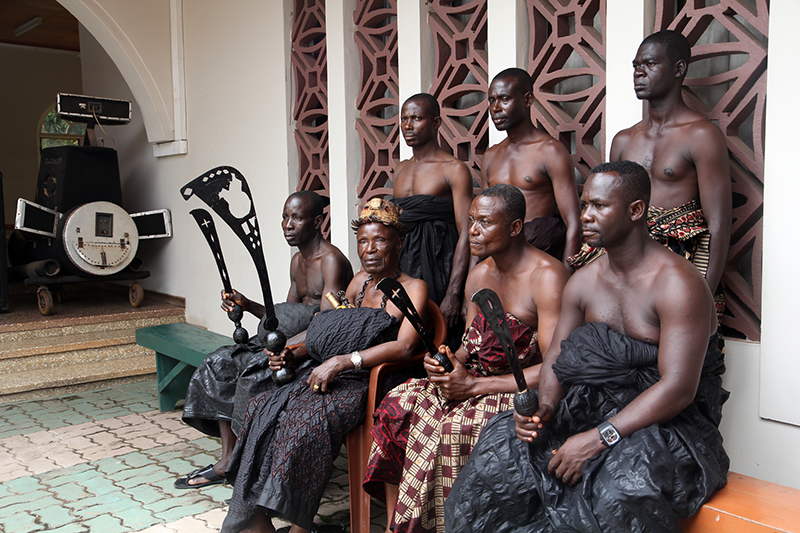 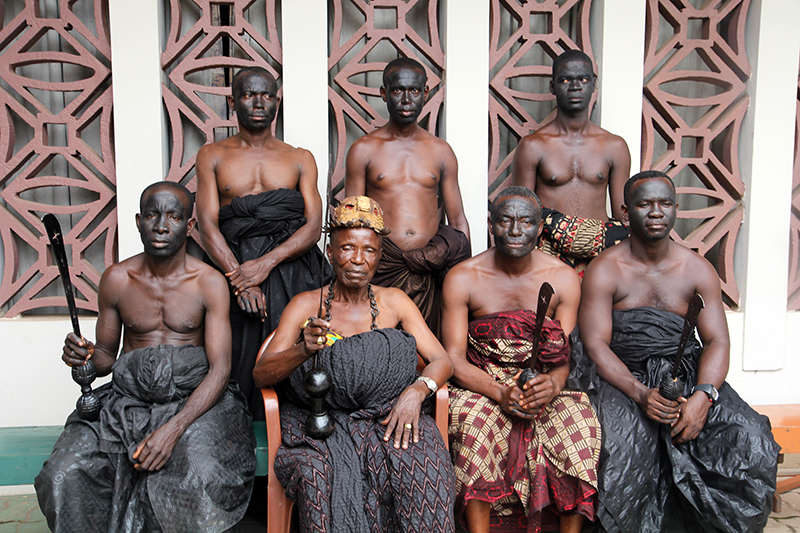 It is for the chief of tɔprɛ. Symbolic of his position and part of the regalia of the Gold Stool. Necklace is referred to as sompa (good service). Hat: sebɔ nhoma (leopard skin) same as all of the abrafoɔ hats. The only difference is the relatively larger nsɛbɛ (talisman) on his forehead. Four sɛpɔ (knives) are tied together. 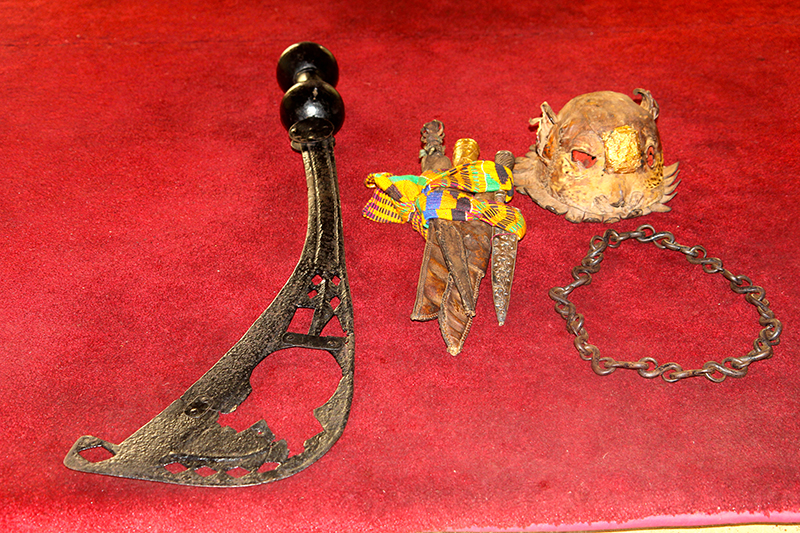 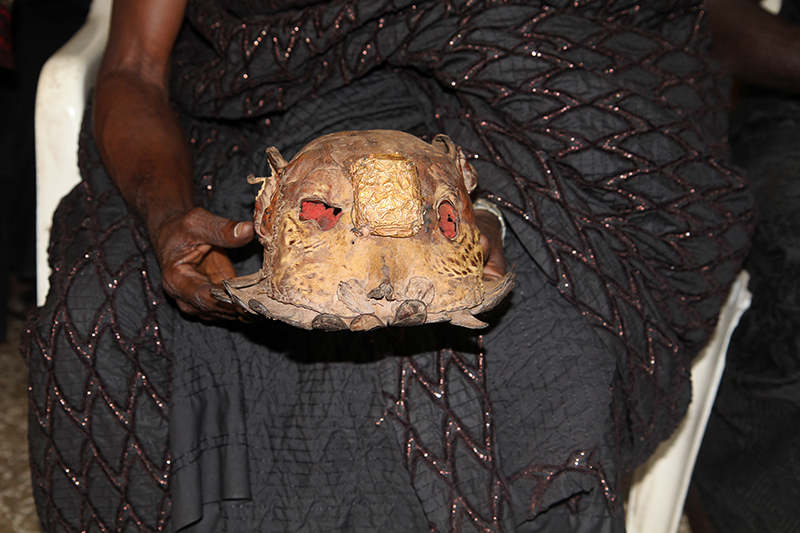 Here is the tɔprɛ drum. It is wrapped in two layers of cloth when not in use. The first cover is made up of the bark of the kyɛnkyɛn tree, also known in Asante as ntoma panin. It is referred to as ntoma panin because that was the first type of cloth that the Akan used to wrap or cover themselves. The second cover is made from ɛsrɛm nnasoɔ kassa. There are four human skulls on top of the drum and it is said that is how it was found in the forest. 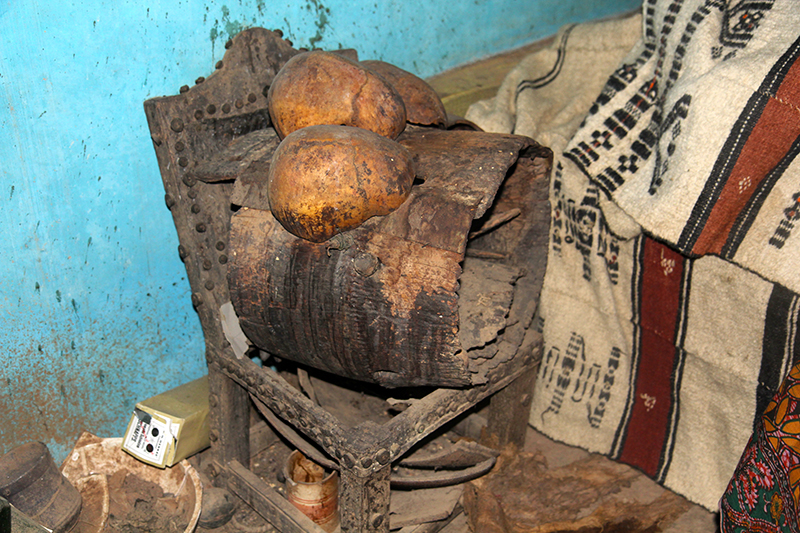 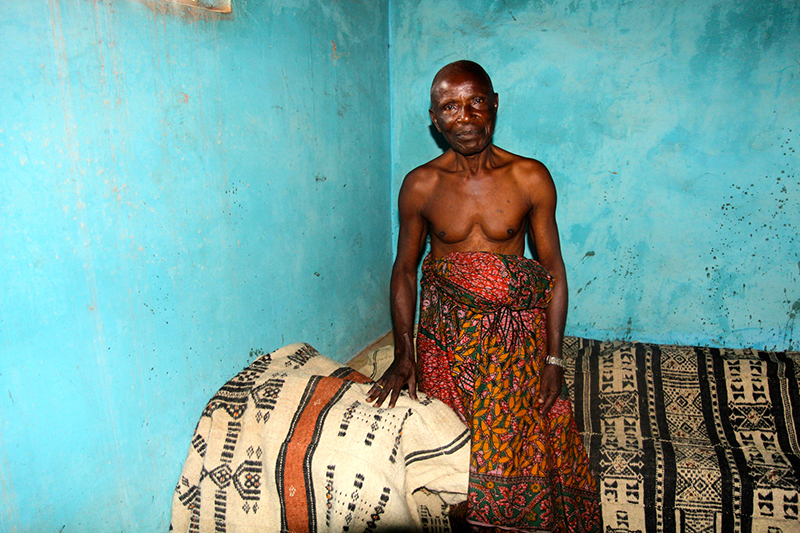 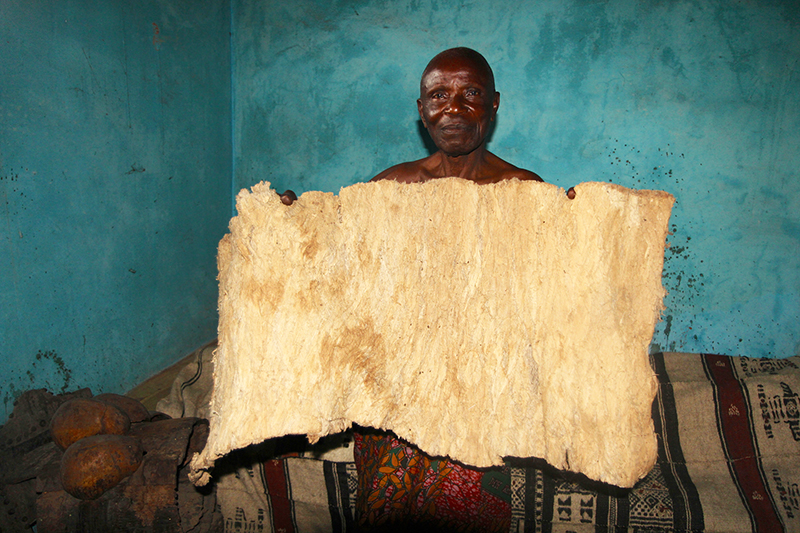