One of the longest unwritten chapters in history of the United States is that treating of the relations of the Negroes and the Indians. The Indians were already here when the white man came and the Negroes brought in soon after to serve as a subject race found among the Indians one of their means of escape. -Carter G. Woodson, Journal of Negro History, 1920

In the course of time, the American people got into Florida and begin to live. This caused trouble. The colored people and the Indians, being natives of the land, naturally went on a war path. They fought until the American people called for peace. The Indians and the Negroes gave them peace. -Joe Phillips, Black Seminole, 1930

According to Willam Loren Katz's book, Black Indians, difficult issues are raised. According to this analysis, europeans played skillfully on racial differences and ethnic rivalries. They kept the pot of animosity boiling. Whites turned Indians into slavehunters and slaveowners, and Africans into " Indian-fighters." Light-skinned Africans were pitted against dark-skinned, free against enslaved, Black Indians against "pure" Africans or "pure" Indians. Its title stirred controversy among people with African ancestors who had long accepted themselves as Indians. It raised concerns among Native Americans still battling a government that traditionally seized any excuse (e.g., mixture with Africans) to violate treaties, land claims and human rights.

On a personal note, of all the things I was told while growing up one fact- that my grandmother's uncle was an Indian tracker stuck out. Stories of the red and black Indians in our family line became more evident as I viewed old family photographs. The 1920s estimate that a third of African Americans have Indian blood (this is a gross underestimate). Most people of color are accused of denying their blackness if they dare "claim" some "Indian" in their family. Although the latter is valid. Especially when you see the pictures and hear the stories of the red and black...and who can deny it when you stare at the physical characteristics of family members.

A compelling reality is that Africans and the so-called "native" to America were already here on the continent of North America-each participating in balance with nature. That is, until the pale-face showed up:

The european is to the other races of mankind what man himself is to the lower animals: he makes them subservient to his use and when he cannot subdue he destroys them.
-Alexis de Tocqueville, Democracy in America, 1835 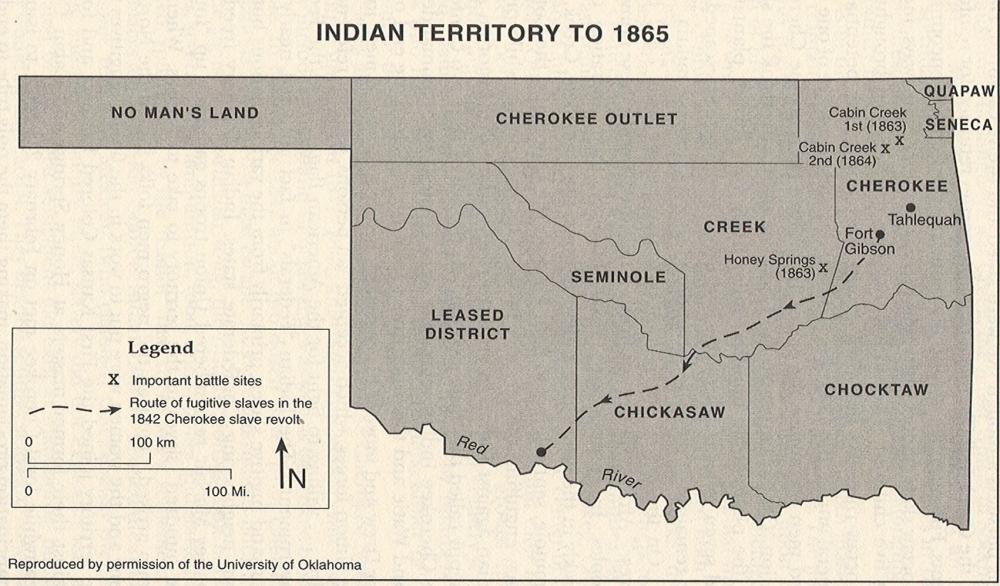 Map of the 1842 Cherokee Slave Revolt

The fugitives burglarized a store, taking horses, mules, several rifles, ammunition, and supplies for their escape to Mexico.  Once Cherokee officials discovered the escape, they sent a search party to bring them back. As the fugitives made their way southwest from the Cherokee Nation, they were joined by ten escaped slaves from plantations in the Creek Nation. The Creeks joined the Cherokees in pursuit of the fugitives, confronting them near the Canadian River.  A battle ensued with two fugitives killed and twelve captured.  The remaining twenty-one escaped and continued to head for Mexico while their Cherokee and Creek pursuers returned to their nations for reinforcements.

Fifteen miles west of the Canadian River, the fugitives met James Edwards, a white man, and Billy Wilson, a Delaware Indian. Edwards and Wilson, known fugitive slave hunters, had in their custody eight slaves, one man, two women, and five children who had previously escaped from the Choctaw Nation and were headed west to join the Plains Indians before being captured.  The Cherokee and Creek fugitives killed Edwards and Wilson, added the Choctaw fugitives to their group, and continued their journey to Mexico.

Noting the fact that fugitives from three of the five major nations in Indian Territory were fleeing the area and fearing a general escape by other enslaved people in the territory, the National Council of the Cherokees on November 17, 1842, authorized the Cherokee Lighthorse Militia to find and return the escapees and appointed John Drew as its captain.  On November 21, 1842, Captain Drew left Webbers Falls with eighty-seven well-armed men in his command to pursue the 29 fugitives.  On November 26, they caught up with the fugitives near the Red River after they had become confused and disoriented on the high plains, disagreeing on whether to go south or west to Mexico.

Drew and his men captured the fugitives (by then numbering thirty-one), and brought all of them back to Webbers Falls by December 7. After an investigation, the Cherokee Nation Council ordered five fugitive slaves to be held at Fort Gibson pending trial for the murders of Wilson and Edwards. After the trial they were executed.  The council ordered the remaining fugitives to be returned to their Cherokee, Creek, and Choctaw owners.  The Cherokee slave revolt was the largest slave rebellion in the Indian Territory and the only one that involved fugitives from different Indian nations.