They were there for a business meeting. Starbucks says it’s sorry. The police chief says officers did nothing wrong.

Two black men were arrested and escorted out of a Philadelphia Starbucks on Thursday after staff called the police to report they refused to leave; the men hadn’t ordered anything and were reportedly waiting for a business associate to arrive. The staff reportedly called 911 because Starbucks does “not allow nonpaying people from the public to come in and use the restroom,” Philadelphia Police Commissioner Richard Ross told the Philadelphia Inquirer. The employees said the men were trespassing and had refused to leave the restaurant.

A video of the incident has swept across the internet and sparked widespread outrage, prompting Starbucks to issue a less-than-satisfying apology on Saturday afternoon.

The saga began when a video posted on Twitter on Tuesday showed police arresting two black men in Twitter for “doing nothing,” in the words of the user who posted the video. Two people — not the men — can be heard protesting as the police remove the men’s chairs and escort them out. “This is ridiculous,” one white man says to an officer in the video. The men do not protest.

The video has been viewed more than three and a half million times on Twitter since Thursday.

@Starbucks The police were called because these men hadn’t ordered anything. They were waiting for a friend to show up, who did as they were taken out in handcuffs for doing nothing. All the other white ppl are wondering why it’s never happened to us when we do the same thing.

Police responded to the call and to keep things from “getting out of hand,” he said, and asked the men to leave, as Starbucks did not want them there. Ross defended the officers, saying they “did absolutely nothing wrong,” but the police department said it was conducting an “internal investigation.”

We are aware of an incident that occurred on 4-12-18 at the Starbucks Café at 18th and Spruce. The entire incident, including the actions of the responding officers, is under internal investigation. Once we gather all the facts, we will comment further.

There are a lot of questions here, and they’re not just about the police.

The video of the incident shows at least six police officers taking the two men into custody — a high number, given they were doing nothing.

The obvious question: Beyond the police’s response, why were they called in the first place? People meet in Starbucks all the time, and they wait for others in the restaurant before ordering. Starbucks issued an apology on Saturday to the “two individuals and our customers” and said the company is “disappointed” that it led to an arrest. “We are reviewing our policies and will continue to engage with the community and the police department to try to ensure these types of situation never happen in any of our stores,” the statement says. 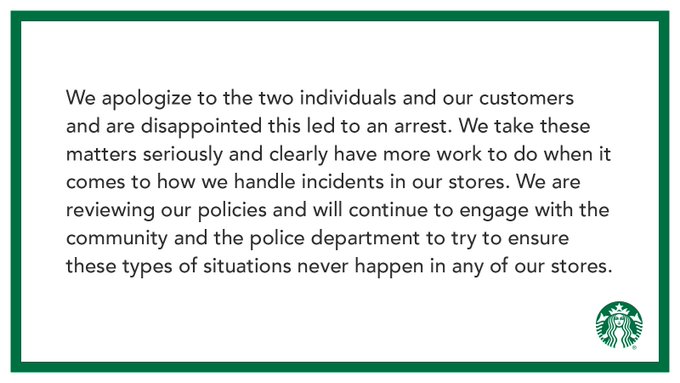 We apologize to the two individuals and our customers for what took place at our Philadelphia store on Thursday.

A second video from the Thursday incident posted on YouTube shows an extended version of what happened. The two black men who are ultimately arrested speak calmly to police. A third man, later identified real estate developer Andrew Yaffe, who is white, appears and protests.

“Does anybody else think this is ridiculous?” he asks, calling it “absolute discrimination.” Yaffee spoke with attorney Lauren Wimmer about the incident, and she talked to the Philadelphia Inquirer. “He was meeting with the two gentlemen at the Starbucks to discuss business,” Wimmer said Saturday, identifying Yaffe as a friend. “These two guys are business professionals in commercial real estate.”

Wimmer is representing the men who were arrested, who have not been identified publicly. She told the Inquirer she believes the reason for the arrest was “completely based on race” and noted there was “no indication any crime was being committed.”

Amazingly, this happened to them and they weren't even wearing traditional Afrikan clothing...lol

Only Starbucks I know in Philly is center city on south broad street near city hall. If you go there or walk by on any given day you will see people chillin in there.  Don't get why people buy that expensive stuff anyway.  So much for city of brotherly love....