Nana Kwasi Wiredu was born in 1931 in Ghana and had his first exposure to philosophy quite early in life.  He read his first couple of books of philosophy in school around 1947 in Kumasi, the capital of Ashanti.  These books were Bernard Bosanquet’s The Essentials of Logic and C.E.M. Joad’s Teach Yourself Philosophy.  Logic, as a branch of philosophy attracted Wiredu because of its affinities to grammar, which he enjoyed.  He was also fond of practical psychology during the formative years of his life.  In 1950, whilst vacationing with his aunt in Accra, the capital of Ghana, he came across another philosophical text which influenced him tremendously.  The text was The Last Days of Socrates which had the following four dialogues by Plato: The Apology, Euthyphro, Meno and Crito. These dialogues were to influence, in a significant way, the final chapter of his first groundbreaking philosophical text, Philosophy and an African Culture(1980) which is also dialogic in structure.

He was admitted into the University of Ghana, Legon in 1952, to read philosophy, but before attending he started to study the thought of John Dewey on his own. However, mention must be made of the fact that C. E. M. Joad’s philosophy had a particularly powerful effect on him. Indeed, he employed the name J. E. Joad as his pen-name for a series of political articles he wrote for a national newspaper, The Ashanti Sentinel between 1950 and1951.  At the University of Ghana, he was instructed mainly in Western philosophy and he came to find out about African traditions of thought more or less through his own individual efforts.  He was later to admit that the character of his undergraduate education was to leave his mind a virtual tabula rasa, as far as African philosophy was concerned.  In other words, he had to develop and maintain his interests in African philosophy on his own. One of the first texts of African philosophy that he read was J. B. Danquah’s Akan Doctrine of God: A Fragment of Gold Coast Ethics and Religion.  Undoubtedly, his best friend William Abraham, who went a year before him to Oxford University, must have also influenced the direction of his philosophical research towards African thought.  A passage from an interview explains the issue of his institutional relation to African philosophy:

Wiredu began publishing relatively late, but has been exceedingly prolific ever since he started. During the early to mid 1970s, he often published as many as six major papers per year on topics ranging from logic, to epistemology, to African systems of thought, in reputable international journals.  His first major book, Philosophy and an African Culture (1980) is truly remarkable for its eclectic range of interests.  Paulin Hountondji, Wiredu’s great contemporary from the Republic of Benin, for many years had to deal with charges that his philosophically impressive corpus lacked ideological content and therefore merit from critics such as Olabiyi Yai (1977).  Hountondji (1983; 2002) in those times of extreme ideologizing, never avoided the required measure of socialist posturing.  Wiredu, on the other hand, not only avoided the lure of socialism but went on to denounce it as an unfit ideology.  Within the context of the socio-political moment of that era, it seemed a reactionary—even injurious—posture to adopt.  Nonetheless, he had not only laid the foundations of his project of conceptual decolonization at the theoretical level but had also begun to explore its various practical implications by his analyses of concepts such as “truth,” and also by his focused critique of some of the more counter-productive impacts of both colonialism and traditional culture.

By conceptual decolonization, Wiredu advocates a re-examination of current African epistemic formations in order to accomplish two objectives.  First, he wishes to subvert unsavoury aspects of indigenous traditions embedded in modern African thought so as to make it more viable.  Second, he intends to undermine the unhelpful Western epistemologies to be found in African philosophical traditions. On this important formulation of his he states:

By this I mean the purging of African philosophical thinking of all uncritical assimilation of Western ways of thinking. That, of course, would be only part of the battle won. The other desiderata are the careful study of our own traditional philosophies and the synthesising of any insights obtained from that source with any other insights that might be gained from the intellectual resources of the modern world.  In my opinion, it is only by such a reflective integration of the traditional and the modern that contemporary African philosophers can contribute to the flourishing of our peoples and, ultimately, all other peoples. (Oladipo, 2002: 328)

In spite of his invaluable contributions to modern African thought, it can be argued that Wiredu’s schema falls short as a feasible long term epistemic project.  Due to the hybridity of the postcolonial condition, projects seeking to retrieve the precolonial heritage are bound to be marred at several levels.  It would be an error for Wiredu or advocates of his project of conceptual decolonization to attempt to universalize his theory since, as Ngugi wa Thiongo argues, decolonization is a vast, global enterprise.  Rather, it is safer to read Wiredu’s project as a way of articulating theoretical presence for the de-agentialized and deterritorialized contemporary African subject.  In many ways, his project resembles those of Ngugi wa Thiongo and Cheikh Anta Diop.  Ngugi wa Thiongo advocates cultural and linguistic decolonization on a global scale and his theory has undergone very little transformation since its formulation in the 1960s.  Diop advances a similar set of ideas to Wiredu on the subject of vibrant modern African identities. Wiredu’s project is linked in conceptual terms to the broader project of political decolonization as advanced by liberationist African leaders such as Julius Nyerere, Jomo Kenyatta, Kwame Nkrumah, and Nnamdi Azikiwe.  But what distinguishes the particular complexion of his theory is its links with the Anglo-Saxon analytic tradition. This dimension is important in differentiating his project from those of his equally illustrious contemporaries such as V. Y. Mudimbe and Paulin Hountondji.  In fact, it can be argued that Wiredu’s theory of conceptual decolonization has more similarities with Ngugi wa Thiongo’s ideas regarding African cultural and linguistic agency than Mudimbe’s archeological excavations of African traces in Western historical and anthropological texts. On Sunday July 17th, 2022, 5pm GMT, Abibitumi.com celebrated its 16th Year Anniversary together with the 5-year anniversary of the enstoolment of our founder-Ɔbenfo Ọbádélé… As a 13 year old boy in Ghana, he began to learn how to cook for a family of 5.
His father’s wife would call him to the kitchen to cut the onions. Grind the
tomatoes. Mix the ingredients. Over 14 years later, Lwanga Songsore is still
spicing, stirring, and sautéing—he’s developed a local reputation for creative and
delicious takes on indigenous Ghanaian recipes, and is changing the narrative
around men and cooking in Africa Abibitumi.com, Celebrating 16 years from Digital Idea to Physical Institution! – By Kala Kambon June 8, 2022 When the lion runs and looks back,… 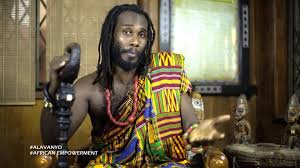 ALAVANYO #2: AFRIKAN WORLDVIEW is now available. We will have the official launch on September 5th at 1PM Ghana Time, but those who want to…